All I know right now of Murphy’s beginnings is from the only 1970’s document I hold, which is the MG “Passport to Service” document that accompanied the car at the time of initial sale. I guess in many ways, I’m lucky to even have that.

What this document tells me is that Murphy was initially purchased by a Mr R.G. Sharpe of Sutton Bassett, Northants on the 10th June 1972, from Latham’s (Leicester) Limited, Belgrave Gate, Leicester.

There are a few service stamps in the booklet, giving an indication of early life, as follows:

Entry 1: 9th June 1972, was a pre-delivery inspection by Latham’s on the day before the sale date written at the front of the book. Interestingly, it shows 1660 miles on this date, which might seem strange for a new car, but I notice this is written in a different pen, similar to the second service entry. I think this was written here in error, and the actual mileage must have been close to zero.

Below are the pages from the “Passport to Service” booklet, as detailed above: 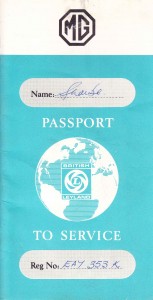 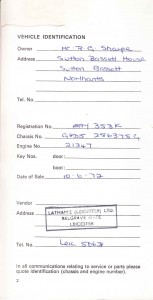 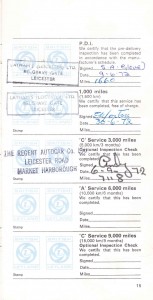 Whilst I’ve so far failed to find any details specifically about Mr Sharpe, I did find an newspaper cutting of an advert for Latham’s in 1975, which may well be they type of thing Mr Sharpe spotted in his newspaper at around that time: 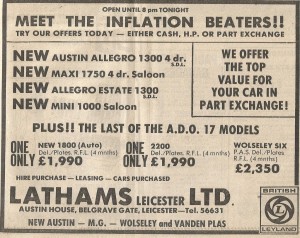 I also found an article in the Leicester Mercury from 23rd May 2013, titled “‘Nineteen extra problems’ for the Leicester motorist of 1970”, with a photo taken from Latham’s car showroom at the time. This may well have been the type of view Mr Sharpe saw at the time, though I’d hope the works were finished by the time he made his purchase two years later!

The nice thought is that this may have been the first “official” road Murphy set his tyres on with Mr Sharpe all those years ago, with the same buildings in the background.

Incase this gets pulled online, rather than only providing a link to the article, I’ve also copied it here for my archive: 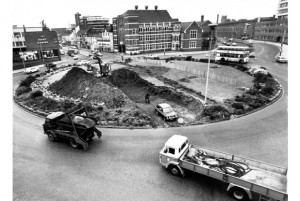 Today, it’s impossible to see this view of Leicester’s Belgrave Gate as the huge concrete flyover obliterates it. Here, in May 1970, we see what you may be forgiven for thinking is the beginning of the destruction of the roundabout for the erection of the flyover – but that’s not the case.

The photo, which was taken from what was then Latham’s car showroom, was intended to draw attention to the forthcoming traffic chaos, which was expected to last six months, while a new 36-inch sewer pipe was laid between Abbey Street and Melton Street.

It’s an interesting picture, as it shows in the centre what was once the Belgrave Gate Methodist Church, converted in the 1930s to the Co-op Hall.

It lost its twin towers on top of the square flat roofs at the front, along with the central arched window and pointed pediment above. It is now a rock music nightclub.

To the right, is a poignant reminder of Leicester’s great days as a hosiery powerhouse – Corah’s, on Burley’s Way, now sadly neglected and vandalised, but then a well-kept frontage to what was one of the largest hosiery factories in England.

After describing what was being done, the picture caption goes on to say:

“To complicate matters, 19 crossings of the road will have to be made in this stretch to lay side connections to the giant new sewer.

“This will, of course, mean 19 extra problems for motorists, in addition to the hold-ups likely to result from the main sewer excavations along the route.

“As a start to the work, a bulldozer has already started a wide trench across the centre of the roundabout, always regarded as one of the most attractive in the city. Shrubs, trees, flowers, turf and ornamental stones have been ripped up, leaving a scene of desolation on what was, until a few days ago, an attractive green and leafy oasis amid the swirling traffic.”

You get the strong impression the writer is not happy about all the destruction, although his reference to “swirling traffic” might seem rather exaggerated when looking at this photo and comparing it with the endless parade of vehicles we see in the same spot today.

The writer continues: “Even when the main sewer and connections are laid, more is to follow. For, in January next year, the surface will be taken up on the opposite carriageway so that smaller rider sewers can be put down.”

But the disruption caused by the sewer must have paled into insignificance compared to the chaos created when building the flyover!