As part of my challenge to unravel the history of Murphy, I attempted to track down previous owners, and this was my first successful attempt.

I managed to find Mr Bob Blackstock, Murphy’s 10th owner, through the power of the web, and he was kind enough to reply to my no doubt unconventional request for help…

My son, Robert, bought the MG from a small car dealer in Nottingham.
At the time he was stationed there when he was a Lt Colonel in the Royal Engineers.
We know nothing of its previous history.
I’m attaching a photo of the car taken soon after purchase.
He subsequently retired from the army and moved to Monmouth to begin a new career in civil engineering.
However, he had done very little mileage in the MG, had no garage at his new home, so sent it to me in Dorset to look after and sell.
David Sothcott bought it, I believe, as a temporary run-about whilst he completed re-comissioning of his own MG.
I have my own 1967 rally MGB GT which I have owned for ten years and which did a Monte Carlo Rally Historique in 2000.
Sorry, of little help to you.
Kind regards
Bob

Despite Bob’s message suggesting this was little help, on the contrary I’m chuffed to bits, so thank-you Bob, if you read this 🙂

So I now know that Murphy’s been through a dealer in Nottingham, owned by a former military man and engineer, (both honourable professions, in my opinion), and made his way to the South of England, in the care of a family who clearly knows MGB’s, then on to the owner from whom I purchased the car.  How cool is that!!! 🙂

Here’s Bob’s photo of Murphy, looking good  in Nottingham in 2009… 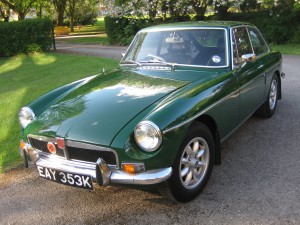 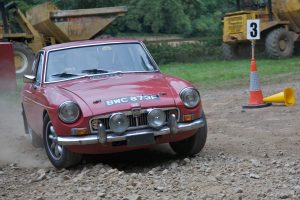