Driving up the M3 motorway, I pulled into Fleet Services to fuel up.  I should have taken notice of the strange, but very slight whining noise, but chose to ignore it, thinking it was no big deal, and that I could investigate it later.

A few miles from the Woking junction, traffic started building up, requiring me to slow down and change gear.  Not the gear change I’d hoped for, there was an almighty clunk which shuddered the whole car, followed by a perpetual grinding sound, and the clutch pedal lost is tension.  I could no longer change gear!!!!

Managing to engage 2nd gear “clutchless-style”, I was able to get off the motorway and pull over safely out of the way.

One tow-truck later, (which included an interesting conversation with the driver about which vehicles he mostly recovered – oh dear Mercedes!), and an engine-out autopsy by Church Garage revealed that the thrust-bearing had shattered.

Investigations also revealed that the clutch could do with renewal, so off they went.

With the clutch – and thrust bearing – replaced, Murphy was back on the road and in good form.  I do notice that pushing the clutch down does occasionally cause a very slight “grinding” sound, but I’ve had this double-checked a number of times, with no issues found. Lot’s of stuff on this on Google, I do think at some point that I’d be well of to get the bearing alignment checked! 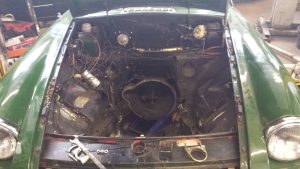 Where there used to be an engine… 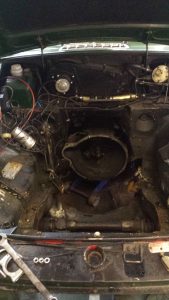