After applying to the DVLA using a V888 form, (Request by an individual for information about a vehicle), they were kind enough to send me an extensive pack of documents tracing Murphy’s history from it’s first owners in the 1970’s to today.

This information was a real treat, as it allowed me to compile details of every single owner from new, where in the country the car resided, and some other interesting facts – starting with the colour!

In December 2014, I contacted the British Motor Industry Heritage Trust who provided me with a Heritage Certificate (below). This certificate showed the car as being originally Glacier White in colour. I knew it was previously red, as there’s odd signs of red paint in some areas, e.g. under bolts, and the V888 document trail also proved this, with the car being resprayed green in 2003. After a conversation with the Heritage Trust, it was assumed the certificate details were incorrect – something that is possible on such old data. 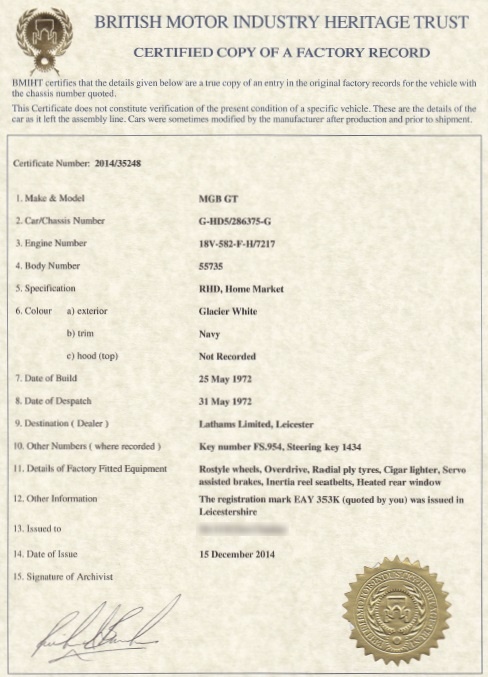 Using the power of the Internet, I was able to track down some of the previous owners or their families, through Facebook, LinkedIn, etc, and wrote to as many of them as possible. I recently received a reply from two sons of the second owner of the car, a Mr Jinks from Leicester, who sadly passed away a few years ago.

One of Mr Jinks’ sons, Martin, wrote back to me, “I am not sure how, but am impressed, that you tracked me down as the car’s owner. It was in fact my mother that had the car – I was too young to drive but remember it well. It was indeed red when we had it in the mid to late 70’s.”

I then received a reply from Mr Jinks’ other son, David, who wrote, “Not much to add I’m afraid – except that I believe the original colour was ice white. My mother had it resprayed a vibrant red shortly after taking ownership. Although good for my mother it was not so good when it came to trade in… the garage was very suspicious as to why it had had a respray… thinking customers would presume it had been in an accident or similar – it wasn’t! Best of luck with your endeavours – if I come across a photo I will forward it. P.S. My overriding memory is squabbling with my brother over whose turn it was to sit in the back!”.

Well, this seemingly “not much” information has changed everything! – Isn’t funny how something trivial from one perspective can change everything from another – First of all, it actually proved the Heritage certificate was right! Murphy was white, then red, and now Green! Secondly, it also confirmed that when it left the Jinks family, it was indeed traded in, which confirms Park Lane Garage in Leicester as the next stop.

This confirmation also provides Murphy with an official birthday, as per the Heritage Certificate – 25th May 1972.

Digging back through the DLVA documents, there is a very early, slightly hard to read document with a crossed out word “white” that I’d previously overlooked. This is, in fact, the notification of change to the DLVA, when the car was changed from white to red on 21/04/1977 by Mrs Jinks.

I would like to thank the Jinks family for getting back to me, and helping to confirm the even more colourful history of this superb little car. 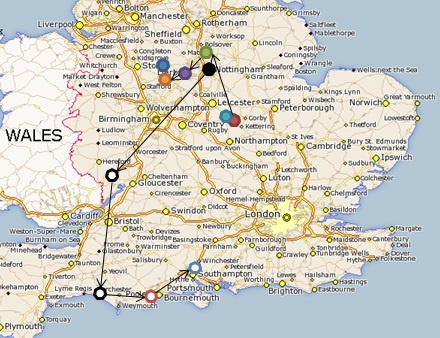 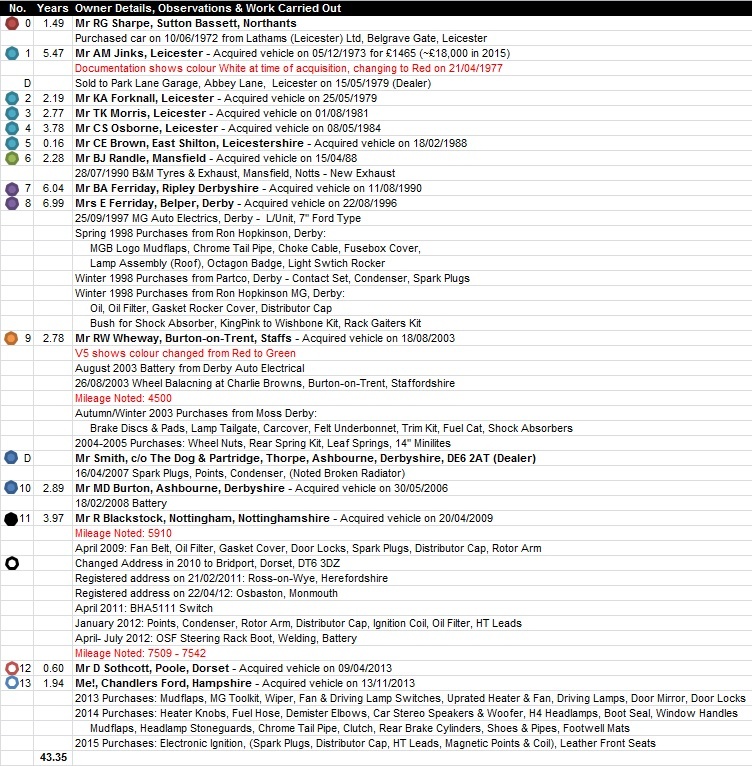