So, on the way home tonight, Murphy’s offside headlamp failed. Full beams were OK, but the main beam was dead.

Assuming this was a failed headlamp bulb, (and I was not pleased given I’d only recently fitted the Osram Night Breakers), I got home, had dinner, and went outside around 20:30 to change the bulb.

Having changed the bulb, the main beam still did not work, so out came the multimeter…

Something was not right, not right at all!

I spent a while checking all connections, buzzing out cables and measuring voltages, and things seemed fine in the engine bay, but not at the headlamp connector itself. So, I eventually peered under the wheel arch where the rear of the headlamp is, and what did I find… a damaged bunch of cables and crimp connectors, one of which was burnt out.

Why are things never straightforward?!?!

It would appear that over the years, the original cables had been “modified”, with up to four crimp connector at various points along a run of less that half-a-metre. These went from the engine bay to the headlamp connector, which still had some of the original cabling for joining to. To problem was that the crimps to the original headlamp cables were under the wheel arch, exposed to the elements, and damaged/corroded over time. This had caused a short, and the wires for the main beam to burn and break. 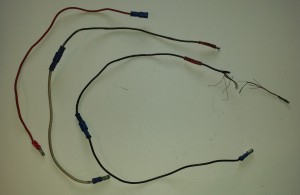 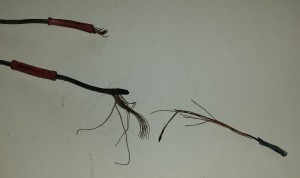 So, I ripped out the crappy multi-crimped cables, and made some new lengths with only one crimp at each end, going from the engine bay connectors to the headlamp – but this time, I located the crimps to the original headlamp wires inside the dry headlamp area, as opposed to under the wheel arch.

Upon reconnecting everything, all was working again, so around 23:15 (almost three freezing hours later!), I called it a night.

And so ends the Offside Headlamp Debacle, and the assumption that it was The Osram Night Breakers, which were fine after all 🙂 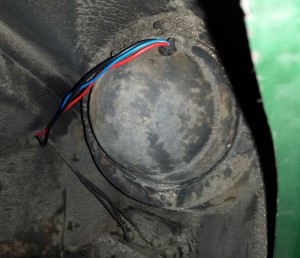 New cables under the wheel arch. Note the lack of crimps!