I’ve had to head up to our offices near Gerrards Cross twice this week, which is a 150 mile round trip taking around two hours each way, thus around 300 miles in all.

The SatNav on my mobile phone was set to avoid motorways, so it was A and B roads all the way. The SatNav was set to recalculate the route to avoid traffic, which meant a slightly different route each time, but seemed to favour the A31 on the way back on both days.

I usually go via the M3 then M25, etc, but taking the scenic route was pleasantly refreshing, and Murphy had no problem with this.

Ascot, Windsor, Henley-on-Thames, Wooburn and Burnham Beeches in particular provide beautiful Autumn scenery, (see photo), so even though it’s a bit of a trek, it was all good.

Most surprising was on the A33 between Basingstoke and Reading, where I drove past a giant column with a statue of the Duke of Wellington on top. Not the kind of thing I expected to see, but upon further investigation is a place called Stratfield Saye House – a large stately home which has been the home of the Dukes of Wellington since 1817.

Reading online, I found that The Duke of Wellington Commemorative Column was erected in 1863, and stands at the entrance to Stratfield Saye on the eastern Heckfield side, and is topped by a bronze statue by Baron Carlo Marochetti. 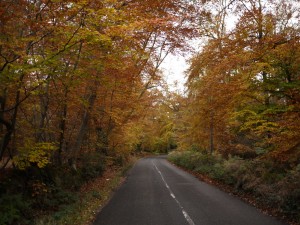 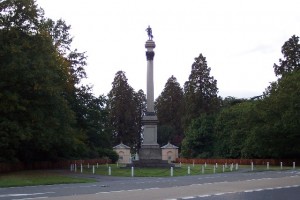 The Duke of Wellington column on the A33 between Basingstoke & Reading.